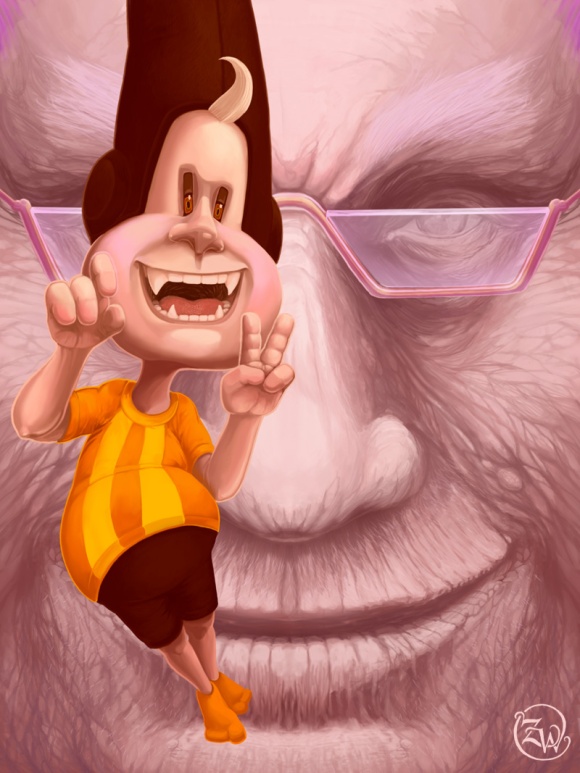 I’m at the point where I’m creating images using elements from other images I’ve already done. Though, I’m still creating the little boy characters from scratch – but that’s really because each of them have pretty unique poses and facial expressions. Eventually, I’ll be able to recycle some of the faces and bodies in later images.

The background character here was reassembled from an earlier piece (Page 9) where I drew sections of her in picture frames. Thankfully this time around I didn’t have to do too much detailing on her skin and only mirrored her face (which is mostly hidden, anyways).

Not entirely happy with this one only because it took much longer than expected – two ish days. In my infinite wisdom of trying to be efficient in my workflow (this was an after thought after doing about 3 images), I’ve started targeting pages which have similar elements such as re-useable characters and backgrounds. I thought this page would have been a simple Skew and Scale job but I was very, very wrong.

Unfortunately I don’t have the works in progress of the semi-smart chop-up job I had to do on the building. Basically, I had to take chunks of Page 7 and Scale and Skew them into this new perspective/angle. Then I had to fill in the gaps and paint over about 50% of the image to get the angle right. At one point, I even had to create a separate file just to redo the door section, only to realise later that most of it is obscured by the character in front. I did manage to reuse the Signage typography from the other illustration and Skew it to fit this setup.

As a result, not exactly an enjoyable piece to do, but a challenge nevertheless. Thankfully, there’s only two exterior shots of the Sweet Shop as I’m quite done with painting that reflective glass surface.

This one was pretty straight forward. I reused the background I had already spent a lot of time on, on one of my other illustrations and expanded it. CLeaned up what ever was missing ad then added the two characters. The trickiest bit here was doing all the sweets, which in the end was just a large pattern I generated from scratch and applied sections of it in each compartment.

Doing the reflections at an underside angle was interesting too. Not a big fan of the excessive pink happening here.

Battle of the Elements

Recently I’ve been watching some inspiring YouTube videos produced by Feng Zhu Design (School, in Singapore). There’s a few videos about his method of setting up MMORPG environs and (digitally) painting fantasy characters. The bit that inspired me (more than his excessive use of the Chalk Brush in PS (I normally use the Soft Round Airbrush)) was the speed at which he would work. All things considered, he works on very large files, but that reduces down a fair bit once he starts detailing – similar to my own method, but I usually spend a lot of time over detailing sections.

He also makes the comment to keep the overall image at percentile stages of completion, in order to facilitate the design schedule. This way each image can be sent on to the production team to “finish” instead of getting int he trap of finishing your own work.

Here’s something I threw together in under 3 hours. It’s rough but finished enough to convey the intent of the battle.

The rough sketch just in brush work – no line. Here I also adjusted the Saturation/Lightness of parts for perspective and depth. 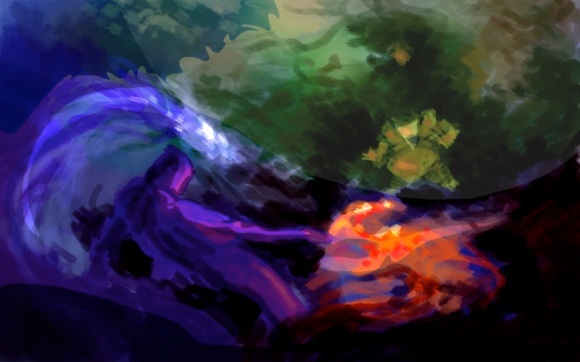 Semi detailing each section to get a better feel for the characters. At this point I have no idea what they are supposed to look like. Here’s my fat druid. 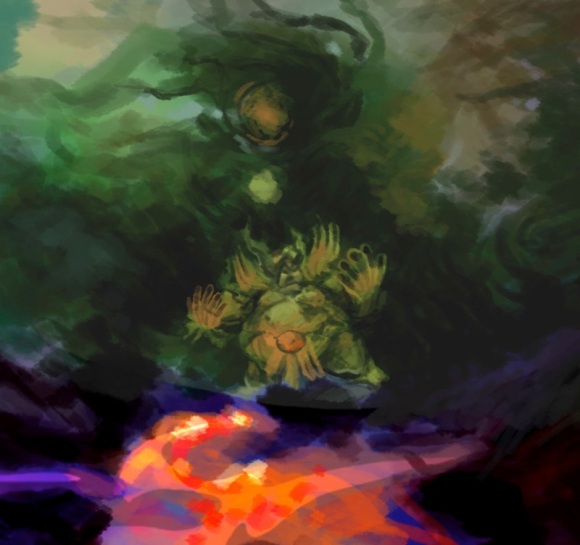 There wasn’t really a progress screen capture of the Mage cause i went into a detailing-zone mindset. Having said this, the reduced image here is still rough. He’s a manipulator of Frost and Fire.

Here’s a more refined image of the Phoenix Fireball and the Druid with his Elemental Monster in the background. The ground was originally meant to be more solid, but I seem to have found them in a body of water as I was painting. 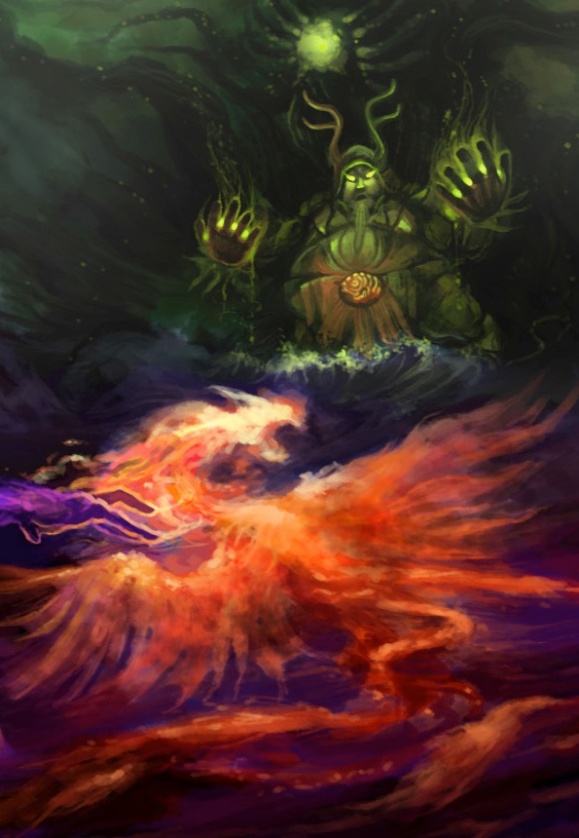 And the final image in all it’s glory. Even with the original adjustment of Hue/Saturation, I had to push it back a bit more to establish depth. I didn’t want it to take 3 hours, but it did due to fiddling with details. I’m finding the longer I work on the Cintiq these days, the more my neck/back aches due to the poor posturing. 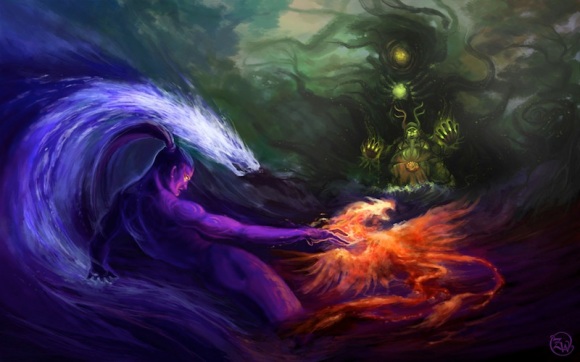 Another intense character piece for the story I’m working on. I fear I have to re-do the ear pieces on each one of these characters int he end of consistency on how they look/operate. Some of them have his ears popping out, and some have various cover sizes. The shading style here is very graphic on the larger version of the character, almost making him look plastic. Not sure how to resolve that one but I hope it’s less work at the end when I decide.

The characters were done on different layers to allow for some movement/placement and less rework on each one. It also came in handy when I needed to add depth with desaturation/colour adjustment and blurring of the hierarchy of each toon. I thought Green was a different choice of background colour, considering the amount of pinks/purples which occur in most of the book.

Had a bit of difficulty with Tiller’s face only because it’s really meant to be restricted/limited in terms of expression. I might revisit it later once I do a few more scenes with her face. She’s missing some accessories though – perhaps a necklace and some bangles? I did have fun fleshing out her outfit. I can’t wait to do a glossy PVC/Leather version for later.

Here’s another quick one – no process because it was a simple background and I spent more time blending the characters skin tones than anything else.

I’m actually not enjoying this. The constant repainting over mistakes is wearing thin. I’m definitely not enjoying the fact the paint dries darker and either takes too long or too fast. Acrylic is definitely a harder medium to work with when working with a limited supply of paint as I’m practically applying washes of colour only to guess what the end result will be. In actuality I should be working with a thicker more forgiving medium like oils (which I can’t afford or have ever used). Perhaps this will be another half-attempted painting, with the canvas to be salvaged later for some more abstract piece. 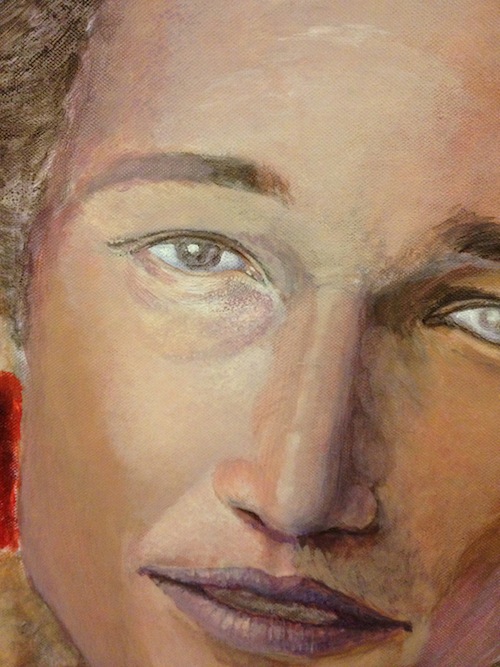 I do really hate noses. I have a general idea of how they look like (you know, everyone has one), but when you’re trying to paint the subtle shaded difference of noses from a frontal light source and have to blend it with the skin that connects to the cheeks, that’s where I get lost. The gradual shading makes or breaks a face.

Here’s the detail in it’s truly hideous  manner. The shading is all wrong and the scale to the face needed adjusting.

This was my first attempt at fixing it, then I gave up for the day. I realised it wasn’t dimensional enough, ie, triangular and popping out, so I painted over as you would extending it out in a geometric manner.

Anyways, after a good night’s sleep and with clearer eyes, I realised not only was it flat, but small and basically out of scale (along with the mouth). Here’s the improved version.

The thing I’m trying to get used to is that acrylic paints dry darker compared to when they are wet. There’s a lot of faith in the painting process at the moment because I’m not sure if I’ve stuffed up a layer until it dries.

Another issue is the speed of drying, which is at the mercy of the weather at the moment. Summer heat and a personal fan blowing on me is making my palette harder to work with. I’ve resorted to the technique of pre-wetting/washing the surface with water for blending of tones. At this point I’m trying to get all the tones right before I attempt the crazy over lay layer of skin details – this airbrushed look is a little plastic.

I’ve had an idea/canvas sitting around in my vicinity for a while and I’ve finally taken the plunge to paint a large portrait. Personally I find portraits challenging only because what I end up painting is never what the actual image looks like. A crippling personal flaw which I’ve been trying to overcome for years. The challenge here though is minimised a touch because the person doesn’t actually exist.

The idea ia an amalgam of two digital images I did a few years ago – a self portrait of a clown getting up facing his morning demons; and a symbolic tarot card image with a cavity in the chest housing a caged heart. This would be an extension of both of those images, but also an exercise in detailing human skin for hyper realism.

Here’s the Work In Progress so far:

Sketch work to work out positioning and scale. At this point I haven’t worked out what the shadows would be, but it was more than likely a single point light source from above. Here you can see the maths of transferring the image onto canvas as I scale up a grid. The canvas is 24 by 36 inches. 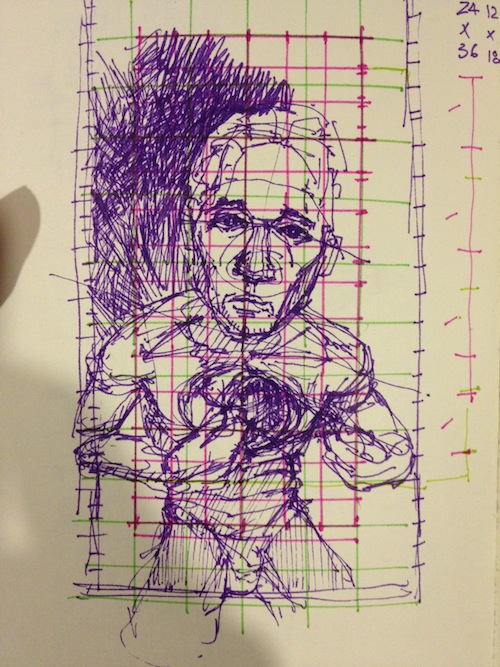 Here’s the sketch in pencil on the painted over canvas. The original image on the canvas was a scene from Adele’s Rolling In The Deep video which I haven’t touched since 2009. I painted over the canvas with a semi thick layer of white to get rid of the blues and purples, but obviously not enough for it to look like a lavender explosion. Nevertheless, the light purple will add a good complimentary tone base of the skin tones I’m thinking of employing.

Here’s the background colour done to help visualise the tones on the foreground. Seasoned artists seem to have worked out how to paint foreground before background for their images. I seem to work the other way around because of my lack of experience with colour. It’s gonna be a warm blood red fading to purple.

I forgot the reason why I stopped working with traditional media – dirt! I really don;t miss smudging carbon/graphite across pristine white surfaces. Admittedly, most of the pencil work has been covered up or wiped off at the time of typing this, but I’ve had to wash my hands a fair few times because my work surface is white and the smudges are annoying.

Using a Burnt Umber wash to paint over the pencil lines to establish the painting and some shading zones. I also reduced the forehead/hair which was exaggerated due to distortion.

Playing with some colour tones. Using only a limited palette of (Acrylics) Warm Red, Warm Yellow, Violet and White. Burnt Umber is currently a wash I’m using to establish some tonal variations.

Base tones put down – time to start working on detailing. (I think the nose looks too small, but let’s see what happens).